It’s not always easy being Lady Gaga—and in 2013, it was especially difficult. For the first time since she emerged from the New York City club ether in 2008, Planet Gaga seemed in peril. Her latest album, ARTPOP, an experimental R&B-tinged effort featuring artwork by Jeff Koons and a controversial duet with R. Kelly, divided critics. She also endured a very public split with her longtime manager, Troy Carter, just a week before the album’s release in November—all of which seemed to knock Gaga out of orbit. But 2014 is a new year, and Stefani Joanne Angelina Germanotta is a space oddity of a pop star. After a brief break around the holidays and some well-documented quality time with her boyfriend, Chicago Fire actor Taylor Kinney (and sporting some remarkable early-winter pantless ‘n’ plaid looks), Gaga is back to being her most inimitably Gaga, with a sparkling new Versace campaign and her upcoming ArtRave tour, which launches later this spring.

How does one account for such resilience, such triumphant unflappability, in the face of turmoil? Bazaar drew up a Proustian little Gaga questionnaire designed to reveal some of the secrets of her extraordinary Gaga-ness. The Lady kindly obliged by answering honestly and fabulously—and she did not disappoint.

HARPER’S BAZAAR: How have you changed in the past few years?
LADY GAGA: I’m actually not very different at all. I work all day, do research, sketch my ideas, prepare for performances. My experience with fame has been the opposite: “How can I stop this from changing me?” I mean I’m not broke anymore—that’s good! But today I’m more comfortable with being who I am. When I was younger, I felt pressure to become someone else once I became successful. But it’s the intention of the work that’s changed. I have fans now. I have a new purpose: to remind them that I am one of them, that we are one another. My consciousness has changed.

HB: What was the first big musical moment in your life?
LG: I went to see Phantom of the Opera with my grandma and my mom when I was very little. The stage, the voice, the music?…Composer Andrew Lloyd Webber has been a massive inspiration to me for some time—the storytelling, that deliciously somber undertone in his music. I just knew that he could see it while he was creating it. It is the same way I experience music.

HB: What’s your favorite outfit of all time?
LG: Audrey Hepburn at the derby in My Fair Lady—the giant white hat with flower detail and bonnet, a mermaid lace gown with a giant bow, and a walking stick. I’ve loved that since I was little. I’ll design something like that one day.

HB: Do you keep a lot of clothes that you’ve worn over the years?
LG: The fashion I’ve acquired over the years is so sacred to me—from costumes to couture, high fashion to punk wear I’ve collected from my secret international hot spots. I keep everything in an enormous archive in Hollywood. The clothes are on mannequins, also on hangers and in boxes with a photo of each piece, and there’s a Web site where I can go to look through everything. It’s too big—I could never sort through it myself! But these garments tell the stories of my life. And then there are the tour pieces. This is the section that is most sacred to me. These are the pieces that have collected energy, joy, and screams from fans all over the world. My fashion is my most prized possession for two reasons: 1) because it is a visualization of all the hard work I’ve put in to get where I am today; 2) because it is a legend to the encyclopedia of my life. It is exactly what I’ve aimed to seep into the artistic consciousness of people all over the world—that life is an art form.

HB: What is your home like?
LG: My “home” is a controversial topic. I don’t exactly have one. I live all over the world. I keep a small rental in New York, where I hang many of my hats when I come to see my parents and New York pals. It’s like a tiny jewel box, covered in rose-gold mirrors, with an oversize pink couch, an expensive vase, a white Marilyn piano, and a boudoir. I do not keep a lot of clothes here—mostly punk wear. And the three most expensive items I’ve ever purchased, including an actual house: my sable, a strand of diamonds, and my Mikimoto pearls.

HB: How do you think people in the future will feel about fashion right now?
LG: I’m not sure. I imagine that there will be a revival of some of these aesthetics—the more bold ones. Those who have watered down themselves for “sale” might make money now, but they are shortchanging their legend. I always think to myself, How do I want to be remembered? I don’t want to be remembered as anything but brave. The only good intention to make money is to help others. I want to be Oprah. I want to be Melinda Gates. If I ever sell products other than my talents, then it will be to give more to others.

HB: What excites you about the idea of performing in space?
LG: I honestly can’t wait. I can’t wait to design the performance. I’m auctioning off my second seat [on a Virgin Galactic flight] to raise money for the Born This Way Foundation. I want to make a moment that is about much more than me. Performing in space is such an honor. I want to challenge myself to come up with something that will not only bring everyone together but will also have a message of love that blasts into the beyond.

HB: What’s something that you’re better at now than when you were younger?
LG: I am better with food. I don’t have an eating disorder anymore. I’m also better at not letting people take advantage of me. Five years ago, when I spotted someone with a hidden agenda, I allowed them to stay around me. I didn’t want to believe it. I thought if I ignored it, then they would eventually see me again—that I’m a human being and not a doll. But it doesn’t work that way. I speak up now. I realized that it’s my own fault that people take advantage. I should be around people who cherish my talents, my health, my time. I’m not a pawn for anyone’s future business. I’m an artist. I deserve better than to be loyal to people who only believe in me because I make money.

HB: Romeo & Juliet or Titanic?
LG: Romeo & Juliet—both the Shakespeare and the Baz [Luhrmann] versions I was changed by profoundly as a child. But I have to say, Titanic is also a classic.

HB: John Lennon or Paul McCartney?
LG: I love Paul so much, but I was and will always be a Lennon girl.

HB: Do you believe in ghosts?
LG: Yes. I have many old souls around me all the time.

HB: What are your guilty pleasures?
LG: Russian hookers and cheap gin. At least I’m honest.

HB: If you were an animal, what would it be?
LG: A unicorn.

HB: What’s the myth about you that you’d like to dispel?
LG: That I’m a myth.

HB: What’s something true about you that people should know?
LG: That it’s not an act.

HB: When was the last time you laughed out loud? At what?
LG: Today. My Taylor [Kinney, Gaga’s boyfriend] stole my SpongeBob SquarePants socks from Tokyo.

HB: What was the last thing you talked about with your mother?
LG: I went through a rough time last year. I felt very taken advantage of by people I trusted. I asked my mother, “I work so hard. I never stop. I never say no. Why doesn’t this person love me, Mom? Why was this person willing to hurt me to help themselves? Why wasn’t I enough? Why is money more important than me? She reminded me to forgive others for not seeing God where I see it. I see God in my fans. She said, “You’re hurt because you don’t operate this way. You are fiercely protective of your inventions because you are your fans.” She helped me understand my own feelings. When someone has pulled the wool over my eyes, I feel that they have pulled the wool over the eyes of millions of fans around the world. She helped me to forgive. You can’t force people to have the same world consciousness and awareness as you do.

HB: When was the last time you cried?
LG: Yesterday. I’m creative. I’m always a laugh away from a tear.

HB: If you received a visit from yourself in the future, what would you want to ask your future self?
LG: I’d ask her to do a duet with me—that would be original. Then I would tell her that I’m so happy she didn’t die young.

HB: Is there anything you regret doing—or not doing?
LG: Sometimes I get this gut feeling about people—maybe I sense a hidden agenda or that they care for the money more than the message. I wish that I’d listen to that feeling instead of waiting for the truth to rear its ugly head. I’m a smart girl. I’m loyal. But sometimes I’m too loyal. I’m not loyal enough to myself.

HB: How much attention do you pay to what people say about you?
LG: I’ve never had that type of relationship with art, that sort of hypercritical thing that’s going around. I often think people don’t know what to think of me, and in fact this is precisely the objective of many of my creations. Even back in the days with Lady Starlight, my original partner, we aimed to bemuse. This feeling of bemusement—it’s neither good nor bad. It just is. Whether critics realize it or not, they’ve been in a very long argument since my public birth. Is it right or is it wrong? This was the intention of those twisted nursery rhyme, I-aim-to-confuse-you verses in my song “Applause.” The conversation is still happening because they don’t know what to think. They’re still scratching their heads. This grappling is my art form—and it’s powerful, because whether they like it or not, they’re still talking.

HB: What’s the biggest thing you’ve learned about yourself so far?
LG: I became very depressed at the end of 2013. I was exhausted fighting people off. I couldn’t even feel my own heartbeat. I was angry, cynical, and had this deep sadness like an anchor dragging everywhere I go. I just didn’t feel like fighting anymore. I didn’t feel like standing up for myself one more time—to one more person who lied to me. But January 1, I woke up, started crying again, and I looked in the mirror and said, “I know you don’t want to fight. I know you think you can’t, but you’ve done this before. I know it hurts, but you won’t survive this depression.” I really felt like I was dying—my light completely out. I said to myself, “Whatever is left in there, even just one light molecule, you will find it and make it multiply. You have to for you. You have to for your music. You have to for your fans and your family.” Depression doesn’t take away your talents—it just makes them harder to find. But I always find it. I learned that my sadness never destroyed what was great about me. You just have to go back to that greatness, find that one little light that’s left. I’m lucky I found one little glimmer stored away.

HB: What do you want written on your gravestone?
LG: “She spread love with every invention.” 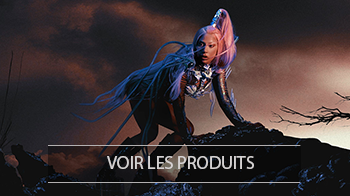